You are here: Home › Traditional Farm

We invite you to step back in time on Molly’s traditional farm, enjoy the animals while soaking in the history.

Molly’s farm is typical of a small holding of land, rented from the local landlord. Large families were expected to eke out a living from a few acres of often poor land. Molly would have set up to an acre of potatoes to feed her family. She would have also reared pigs, cows ,hens and chickens along with a donkey for doing the work around the farm.

The Farm has changed little since Molly’s time and is a reminder of harsh times endured by our ancestors.

Click on map of the farm for a larger view. 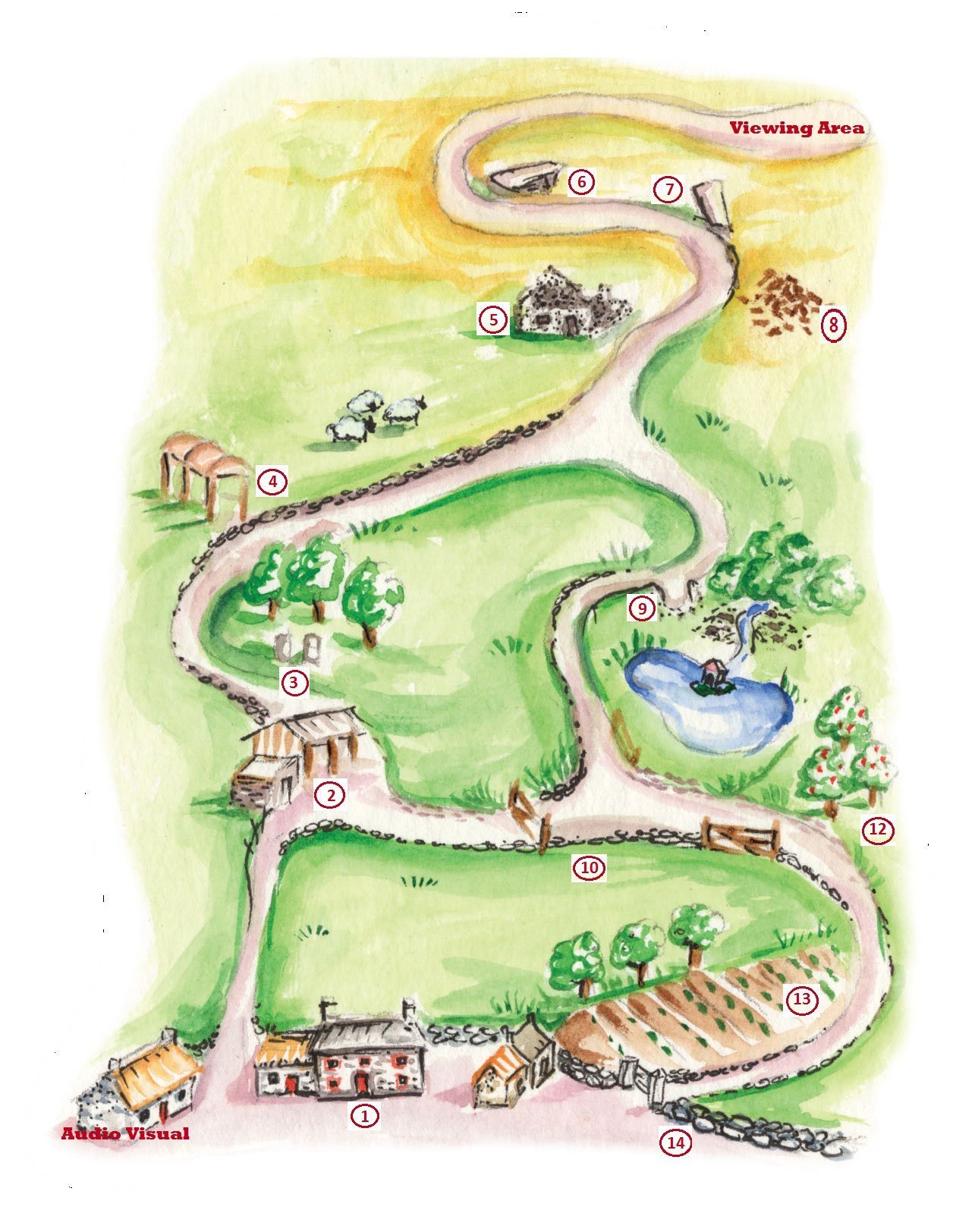 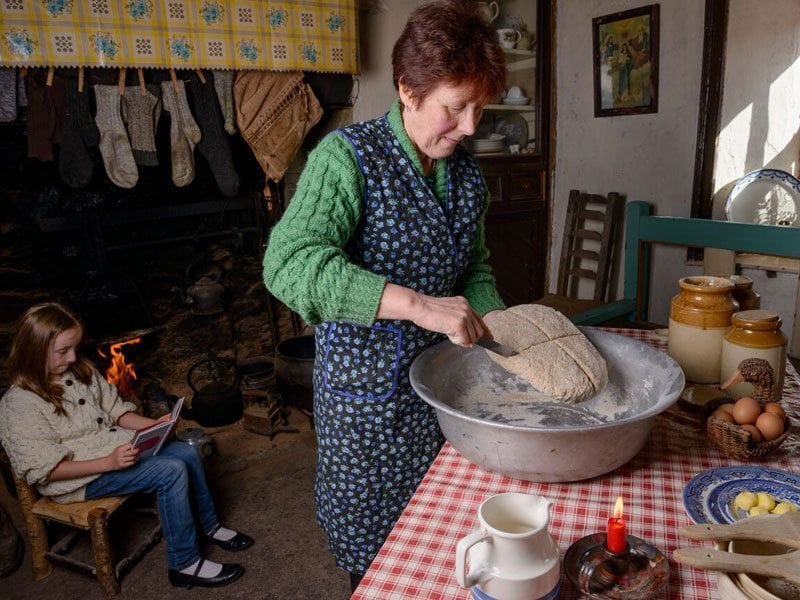 Molly’s Cottage is over 200 years old!  Today you can wonder around the cottage and see how Molly lived all those years ago. 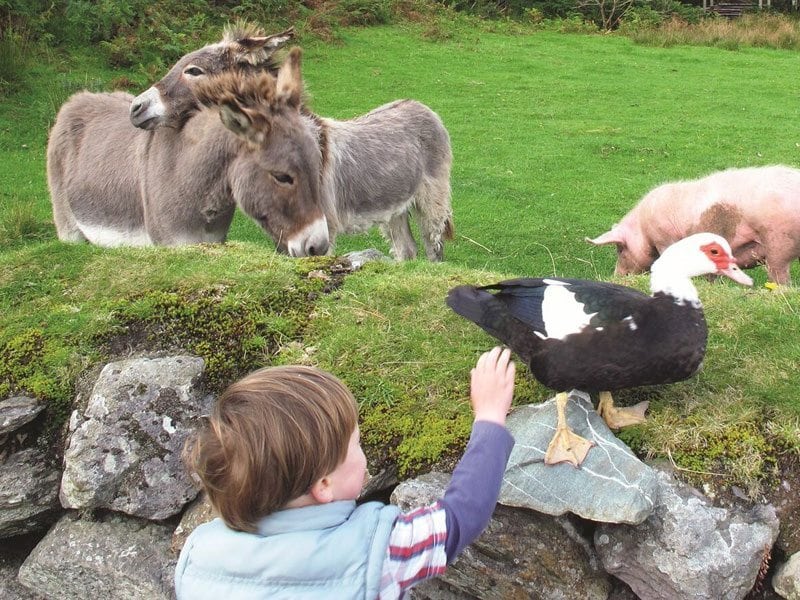 This would have been the busiest place on the farm, where animals were housed and fed and cows milked, by hand, twice daily. There was activity here literally from cockcrow to sunset. 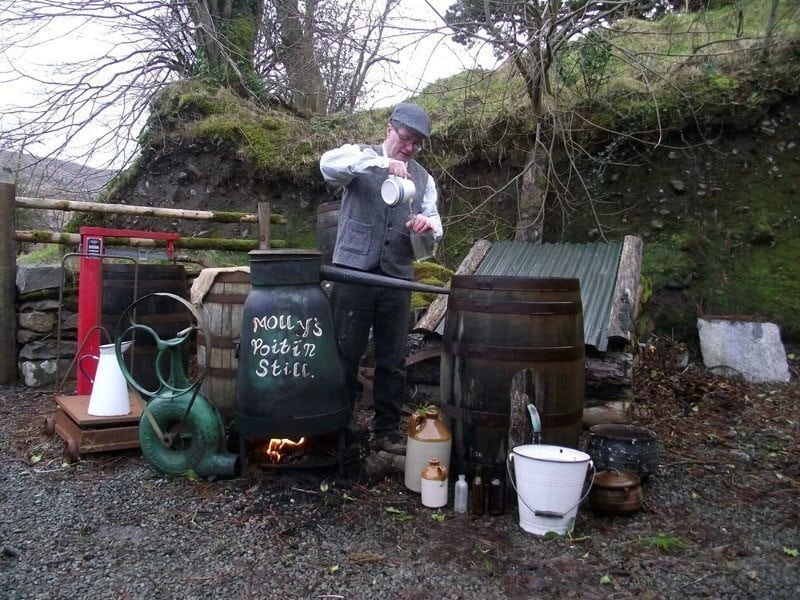 Potatoes or barley were first fermented with sugar and baker’s yeast in large barrels to give “the wash”. It was then heated over an open fire distilled through a “worm” or coiled copper pipe to give a clear but potent whiskey. 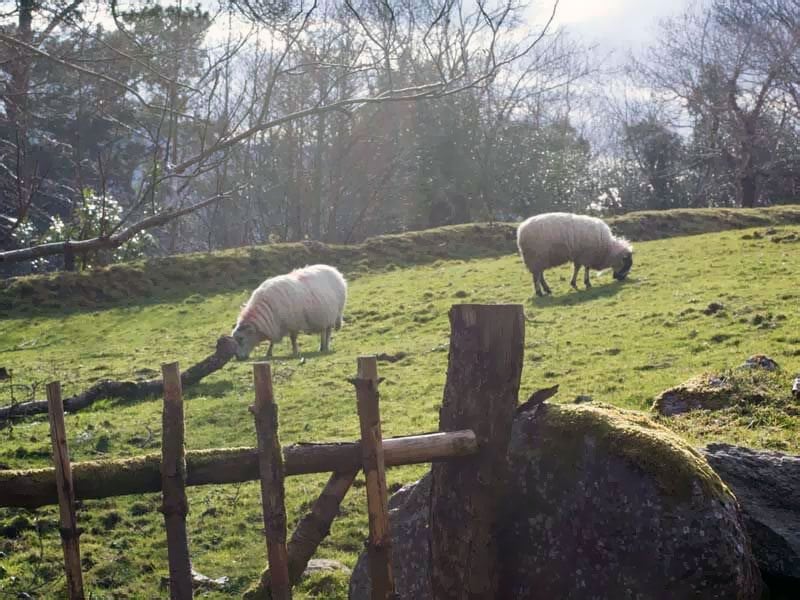 Sheep are well wrapped up against all weather conditions and rarely stay indoors. They would be brought here for shearing and in more recent times for dosing and dipping. After shearing Molly would have carded and spun the wool into yarn for knitting or weaving. 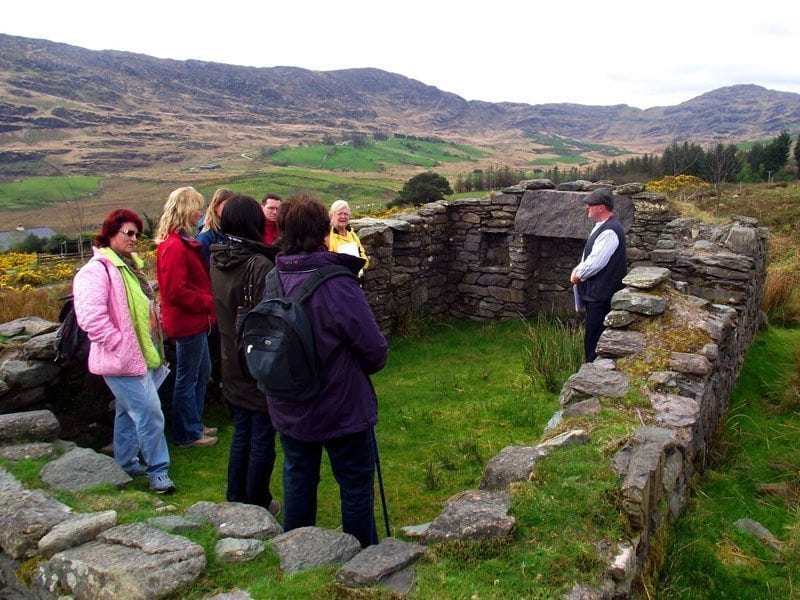 This ruin stands as a poignant reminder of the extreme poverty of many, forced to eke out an existence on very small and poor parcels of land. Potatoes were the staple diet and when the crop failed as a result of potato blight in the 1840s, starvation and death were the inevitable consequence. 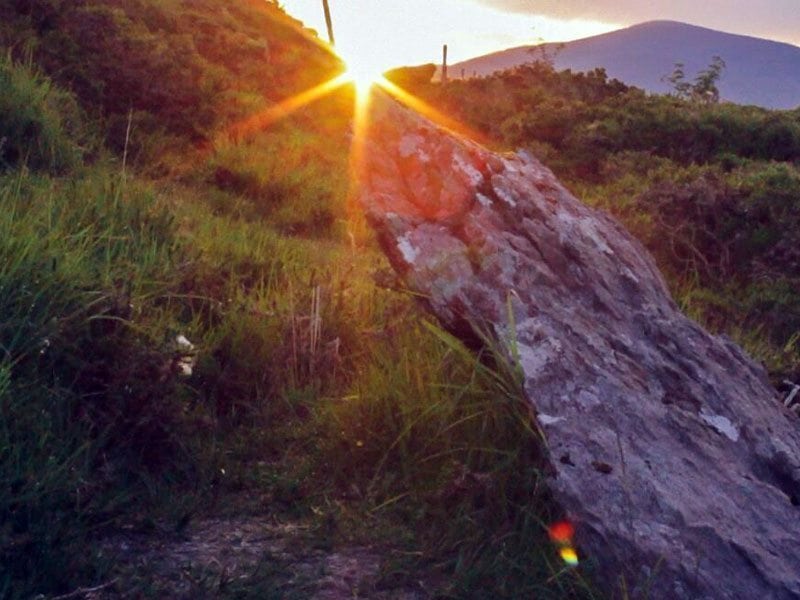 This Neolithic Stone Row alignment consists of two large flag stones that were placed and propped into position some 4-5 thousand years ago. This very unique site gives us clues of the rituals and religious believers of our early ancestors. The stones are arranged to mark the sun rise position on the Summer Solstice (21st June). 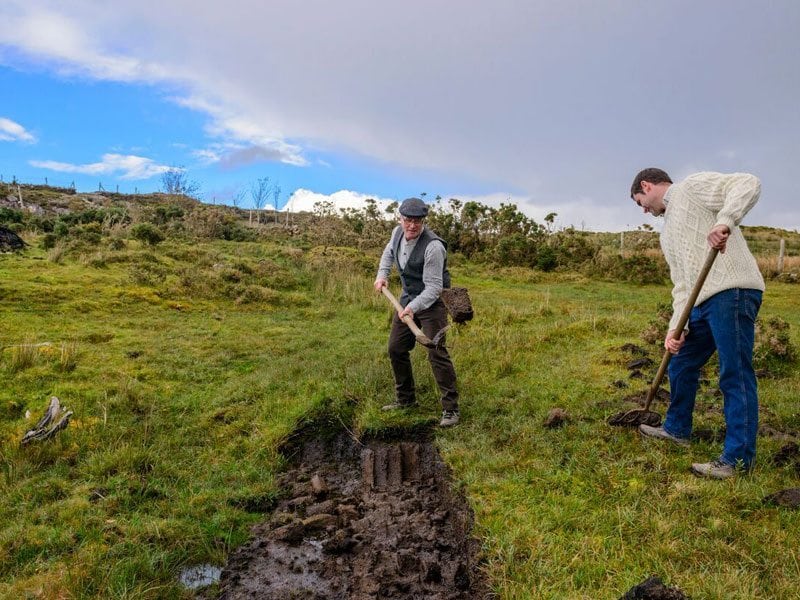 Peat or turf was a primary source of fuel for the fire. In spring the wet peat was cut and laid on the ground to dry. When it had dried sufficiently to handle, it was stacked up in “stokes” so that the wind and sun could dry it completely. It provides excellent firing with a distinctive aroma. 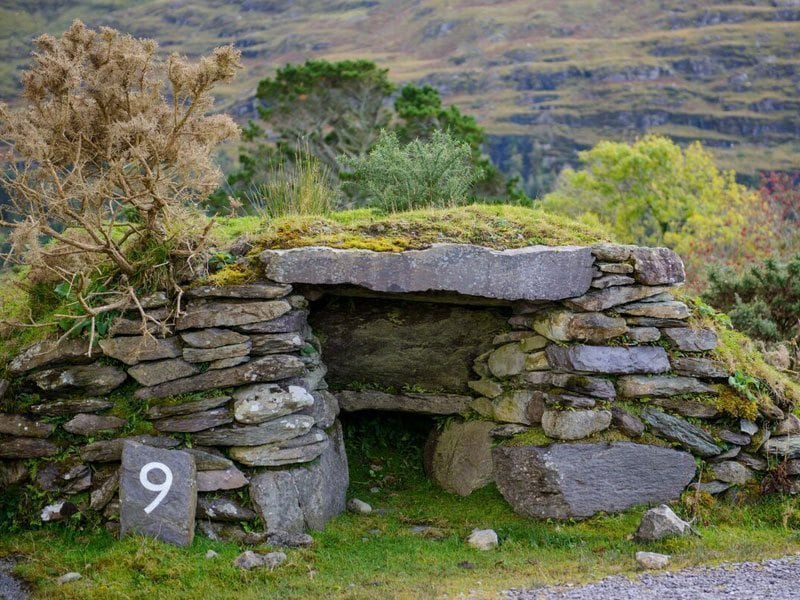 Burned limestone was used not only as fertiliser but also for a variety of purposes such as making mortar (cement) or “whitewash” for painting. The nearest source of limestone is Kilgarvan, some twelve miles away. 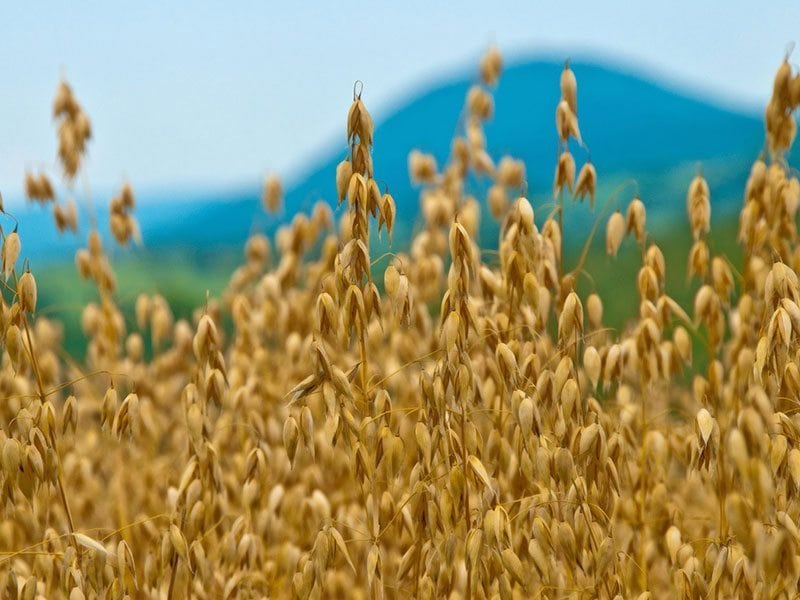 Oats was grown as fodder for the horse and donkey, while barley was milled into flour for baking, or in Molly’s case provided the raw material for her home-made whiskey. The straw was used as bedding for the livestock and as thatch for roofing houses. 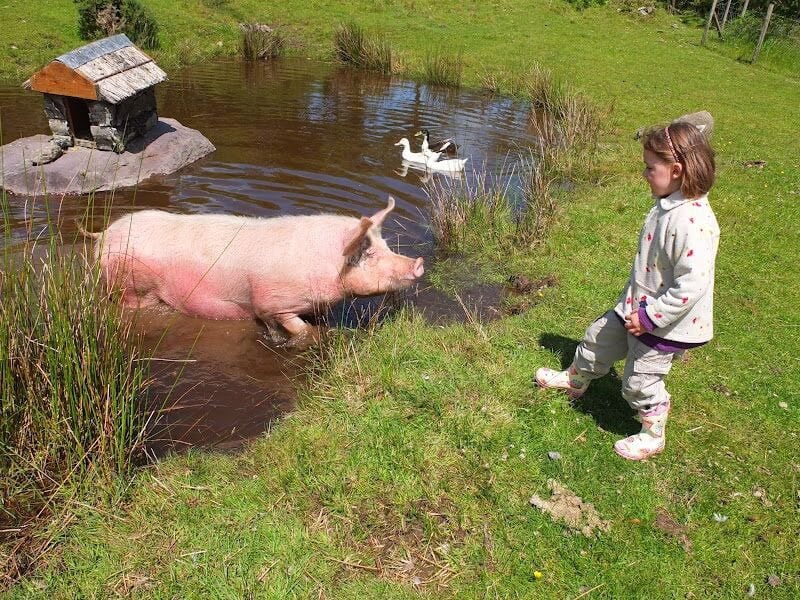 Apart from being a haven for the ducks and geese the pond would also have provided water for washing clothes in the days before washing machines or even running water. 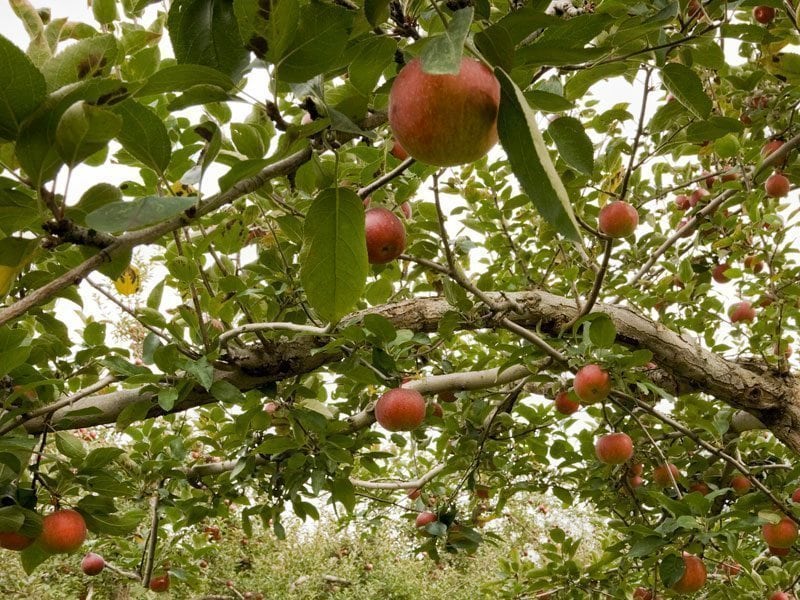 The orchard was a source of fresh fruit for eating and a key ingredient for Molly’s home made jams and tarts. Apples, gooseberries and blackcurrants were among the most popular fruits.

The orchard was also a choice spot to keep the beehives. 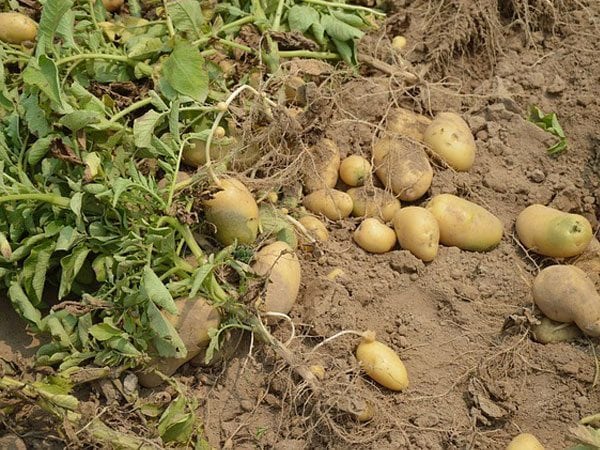 The garden provided most of the food for the house, potatoes and an array of vegetables were planted in mid to late Spring. In Molly’s day the garden could have been extended up to an acre. 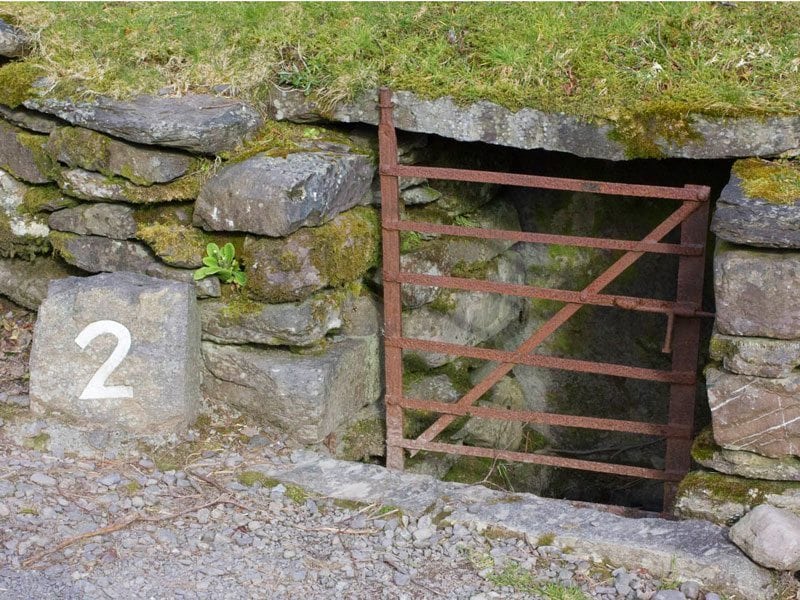 A reliable and convenient source of fresh spring water for drinking and cooking was essential for any house.